As the dental school settles into its new home with a new curriculum, take a moment to see how far we’ve come.

Founded in 1896 as the College of Physicians and Surgeons, the University of the Pacific, Arthur A. Dugoni School of Dentistry has served the San Francisco Bay Area for more than a century.

1896 The College of Physicians and Surgeons (P&S) is founded in San Francisco, and takes up residency at 818 Howard Street, between Fourth and Fifth Streets.
1899 P&S outgrows the building on Howard Street and moves to a building on Fourteenth Street between Mission and Valencia Streets.
1918 The College eliminates its medical and pharmacy schools, and chooses to focus on dentistry.
1920 The number of American dentists has increased by 40 percent since 1910, responding to the country’s high demand for dental care.
1923 The school reorganizes to adapt to American Dental Association (ADA) dental school stipulations.
1942 The school converts to a four-quarter, year-round, three-year program with new classes entering in July instead of September to supply the American military with the dentists needed to fight in WWII. The school still maintains this calendar today and is the only American dental school offering a three-year accelerated program.
1945 To accommodate the still-growing demand for dentists, the school purchases a lot behind the building on Fourteenth Street in San Francisco and brings in portable clinic units and offices to accommodate more students.
1958 The school has outgrown its building on Fourteenth Street and begins raising funds and searching for a new building in San Francisco.
1962 The College of Physicians and Surgeons becomes a part of University of the Pacific and is renamed the University of the Pacific School of Dentistry.
1965 Ground is broken for the dental school’s new building at 2155 Webster Street in San Francisco’s Pacific Heights neighborhood.
1967 The school moves into its new building at 2155 Webster Street.
1970 The dental school’s new dean, Dr. Dale Redig, calls for a remodel of the clinics, resulting in three large group practices administered on a comprehensive patient care model.
1983 Student Housing, a recently purchased and renovated building on Post Street, opens.
1987 International Dental Studies program launches.
1994 Student Community Outreach for Public Education (SCOPE) is founded by students to provide dental health education to children, adults and the elderly.
1996 State-of-the-art Simulation Laboratory opens.
2004 The school is renamed the Arthur A. Dugoni School of Dentistry in honor of its then current dean, Dr. Arthur A. Dugoni, who served as the dean for 28 years.
2006 School completes largest dental school capital fundraising campaign in the U.S. ($65.7 million).
2011 The Dugoni School wins the 2011 William J. Gies Award for “Outstanding Vision – Academic Dental Institution” from American Dental Education Association’s ADEAGies Foundation.
2014 The Dugoni School moves to its new home at 155 Fifth Street, San Francisco.
2014 Official dedication ceremony of 155 Fifth Street takes place on March
7, 2014.
2014 155 Fifth Street campus earns Leadership in Energy and Environmental
Design (LEED) Gold Certification in November.
2015 Dugoni School students become first students in the nation to take a
portfolio licensure exam, offered for the first time in California.
2016 Nader A. Nadershahi, DDS, MBA, EdD named the ninth Dean of the
school.
2017 Pacific Center for Special Care wins 2017 William J. Gies Award for “Innovation – Academic Dental Institution” from the ADEAGies Foundation. 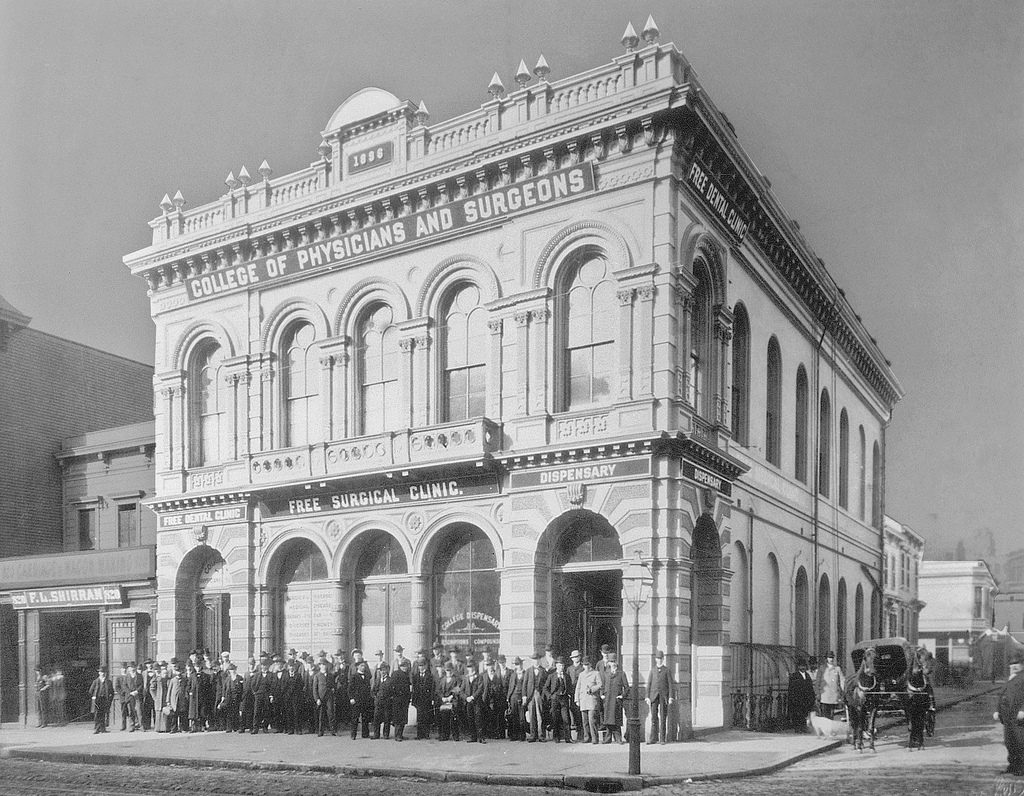 Instruction began in this building on January 4, 1897. Known as Federation Hall, the building was located at 818 Howard Street near Fourth Street, San Francisco, CA. 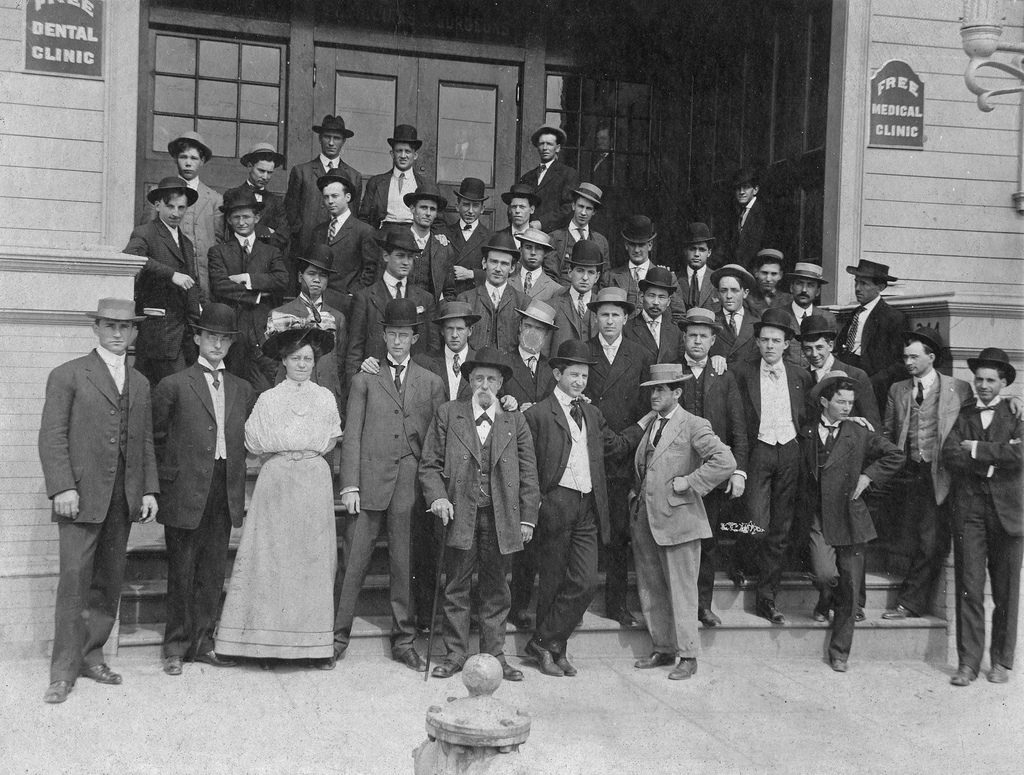 Just before the 1st roll call. September 1906, after the fire. 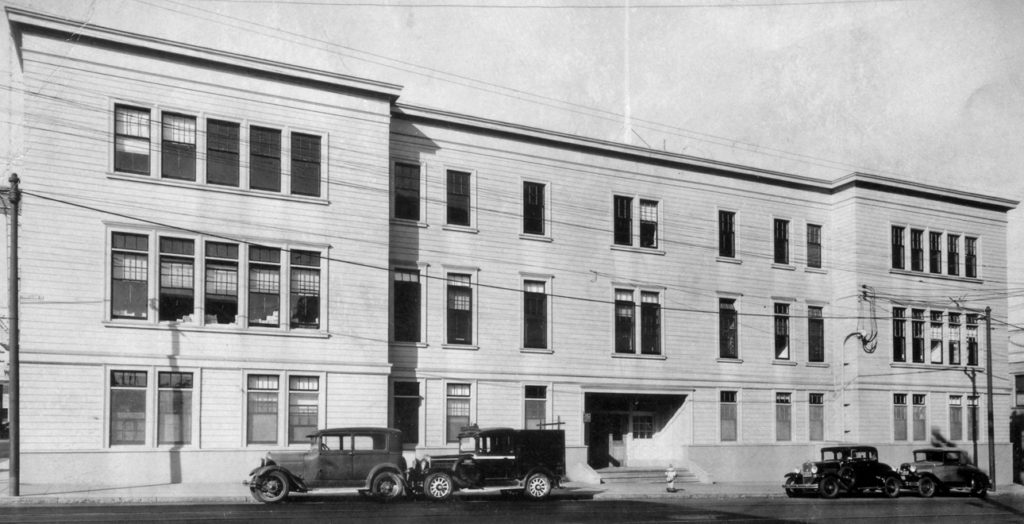