Philosopher and educational reformer John Dewey believed that every great scientific advance requires “a new audacity of imagination.” But imagination, however bold, is only part of the equation of successful change. Innovation involves not only vision but leadership. Its essence lies both in conceiving an idea and then in applying that idea to make changes that improve lives. Innovation, which includes the willingness to take calculated risks, is one of the seven core values articulated by the Dugoni School of Dentistry. Following are profiles of three Dugoni School dentist-innovators from Northern California.

The life of Dr. Stephen D. Harada ’77, San Francisco, was changed in 1998 by a Friday afternoon emergency, when he treated a patient who suffered deep caries under an anterior bridge. Dentists often exhort their patients to brush better, but Harada’s reaction on that particular day went one step further. “It occurred to me,” he says, “that if this patient were using a better-shaped brush, he could have avoided all that damage.”

Harada thought about what a better shape might look like. He sketched out a convex head to curve away from the roof of the mouth and avoid triggering a gag response. He reshaped the bristles into a taper on both edges to act as a guide plane, allowing the brush to fit the anterior lingual curve of a dental arch. He insisted on extra-soft bristles of consistent diameter to minimize enamel and cementum abrasion, arranging by mathematical formula a “planar sweet spot” of mid-brush, bristle-tip maximum tooth contact to enhance performance and reduce bristle bending and splaying. He also added a handle with a reverse curve at the neck to allow a further, unhindered reach to posterior teeth. Harada also designed the brush to fit in a cup holder. “It’s a crowded market,” he says. “I didn’t want a ‘me-too’ product. I wanted a brush that would be elegant in its simplicity, where every aspect is pure function.”

Harada went on to design two other toothbrushes. The Curvex II is a multifunction brush meant for children and handicapped or impaired adults, as well as orthodontic and partially edentulous patients. It features a T-shaped handle manipulated by the fingers, instead of wrist action, and held either vertically or horizontally for easy access to lingual surfaces of anterior teeth. The Curvex 1A, also T-shaped, is designed for the delicate surfaces of infant mouths and those of post-surgery, including implant, patients.

Once he had developed and fine-tuned designs that satisfied all his requirements, Harada applied for patents, which were granted internationally beginning in 2001. He formed a company, Ergonomic Dental Technologies (EDT), and in 2000 raised $250,000 with help from dental school classmates—venture capital for dental products, he points out, is nonexistent—to buy a 16-cavity toothbrush mold made to Curvex specifications. He produced 50 commercial-grade prototypes and passed them out to dentists to try. Positive response to the Curvex was unanimous. Dean Emeritus Arthur A. Dugoni himself, impressed with Harada’s innovations, joined the EDT board of directors.

Harada took the Curvex brush to the Dugoni School of Dentistry for testing. “It’s got to be worthy of the school and the profession,” he thought, “or I’m not selling it.”

Harada took the Curvex brush to the Dugoni School of Dentistry for testing. “It’s got to be worthy of the school and the profession,” he thought, “or I’m not selling it.” He credits faculty members Drs. Shannon Wong and Bill Lundergan ’81 for offering strong support during the process. In 2005, a five-week, single-blind crossover study led by Dr. Lisa Harpenau, associate professor of periodontics, found that the Curvex, which has a 25% softer bristle filament than the Oral-B 40 Indicator, the best-selling toothbrush in the world, was as effective as the Oral-B at plaque removal. The Curvex models, manufactured in the United States, also received the ADA Seal of Acceptance.

In the meantime, Harada’s Patterson Dental representative saw the Curvex. Intrigued, the rep sent samples to the Patterson corporate office in Minnesota. Although Patterson fields thousands of product submissions each month, the company proposed exclusive distribution of the Curvex brand. Harada, who had received other offers of interest, accepted. Since 2008, Harada has found himself traveling with Patterson to all the major U.S. dental shows.

“We are all part of the front lines of health care,” Harada says. “If we see a problem, it’s up to us to design a solution.”

Basic research in an acidic world

Practicing in Monterey, California, Dr. Mic Falkel ’87 felt his frustration mounting.
“I had always been irritated with the way dental anesthetic worked in my practice,” he remembers. “It was central to what I did, but it was also the most variable part of my day. I didn’t like waiting while patients ‘marinated,’ and it really bothered me when they didn’t get numb.”

Falkel also remembered his professors at Pacific teaching that dentists can build a practice on painless injections—which is one reason he took extra care in delivering anesthetic. “But there is always someone who will wince at the first drop of anesthetic, no matter how carefully it is delivered,” he says, “And there are those cases, such as pulpitis and infection, where the anesthetic just doesn’t work well.”

As a practice-building routine, Falkel always calls each day’s anesthetized patients in the evening, just as his third-year group administrator, Dr. Ron Borer had advised. What he discovered was that patients often had no pain from the procedure, but reported discomfort at the injection site. Falkel has a bachelor’s degree in chemistry, and he wondered if post-operative pain might be due to the pH of the anesthetic, which he knew was nearly as acidic as lemon juice. He wondered if buffering anesthetic before injection might eliminate the complaints.

“Where there is controversy in science,” Falkel thought, “there is often opportunity.” Falkel had worked as a chemist in a medical lab during dental school, and he figured that if he could identify—and then find ways to control—the variables that made buffering work, then he might make buffering work to solve problems he had with local anesthetic.

Starting in 2002, he did exactly that, ultimately developing a precision buffering system that carefully manages each of the key variables he was able to identify so that buffering works effectively and reliably. The system Falkel devised, called Onset™, is about the size of a pen and takes under five seconds to buffer an anesthetic cartridge before it is loaded into the syringe. “We think it’s an elegant solution,” he says, “in a simple package, to a complex problem.”

But solving a problem through library and lab work was just the start. “First of all, as a dentist who set out to solve a problem for my own practice,” Falkel says, “I was not really sure if other dentists had the same problems or, even if they did, whether non-dentists would see the value in solving these problems. And although I knew my way around a dental office and the lab, funding and creating a company was a new challenge altogether.”

Falkel turned to friends who had successfully built technology companies and, together, they created Onpharma and took it directly to the experts—other dentists—for funding.

Falkel turned to friends who had successfully built technology companies and, together, they created Onpharma and took it directly to the experts—other dentists—for funding. Onpharma’s group of 95 dentist investors understood the need for improvement in dental anesthetic, and most of them now have had the chance to use the product. Falkel notes that this group, which Onpharma calls its “founders,” brings an understanding of the science, and enthusiasm for the solution that can only come from dentist-to-dentist exchanges.

Onset™ will be available to the general market in fall 2010.

Regardless of how James Cameron may describe it, the blockbuster movie Avatar is not 3-D. “Avatar is really a movie in stereo,” explains Dr. Bruce B. Fogel, associate alumni member and clinical associate professor of endodontics at the Dugoni School of Dentistry. “Stereo means that the images come out of the screen. 3-D, on the other hand, properly refers to images that can be rotated 360 degrees.”

Fogel, CEO and vice president for sales for eHuman, Inc. and senior author of eHuman’s 3-D Tooth Atlas, works regularly in three-dimensional imaging. His Cupertino-based company traces its roots to 1998, when Dr. Paul Brown, a clinical assistant professor of endodontics at the Dugoni School of Dentistry, and a colleague of Fogel’s, participated in a project involving NASA and Stanford University to educate astronauts about how to deal with medical and dental emergencies. The astronaut training included a practice simulator to learn anatomy. “We are passionate about teaching,” Fogel says, “and we realized that we had an opportunity to change a paradigm of teaching and learning, from using illustrations produced in traditional, static two dimensions to interactive 3-D images.”

In 2000, Brown formed a company with Dr. Eric Herbranson, an adjunct assistant professor of endodontics at the dental school, and applied for a multi-year grant from the National Institutes of Health (NIH) to develop a prototype for a library of dental anatomic imaging. “We started with the pulp—what we knew best—and worked our way out, later including occlusion and the temporomandibular joints, using 3-D imaging and animation,” Fogel says of the project. Using the same technology, they also developed an osteology program to facilitate the study of skull anatomy.

The team did its work on Sun workstations at Stanford in 2001 and 2002, where computing power allowed the development of high-resolution images that were then manipulated with proprietary software. But between 2003 and 2006, the power of personal computers jumped to the point of allowing such images to be run on any laptop—a boon for students accustomed to screens full of games and graphics. “Students intuitively understand the advantages of 3-D imaging,” says Fogel, “and they feel comfortable with the technology. One of our jobs nowadays is to educate the educators, who must meet the expectations of the students.” Fogel’s 3-D Tooth Anatomy is currently used in 75% of North American dental schools, as well as for dental education in private practices.

In 2008, the company, boasting a list of partners and collaborators that includes dentists, physicians, surgeons, researchers, educators, artists and technicians, was renamed eHuman. Eleven additional NIH grants, extraordinary in themselves, have funded many of its resources. Most recent products include a 2-D dissection atlas based, Fogel says, on “the finest collection” available of images of human dissection, digitized and made interactive, and quick-reference anatomy capsules downloadable to smart phones. The next step is an online interactive resource. One of eHuman’s recent grants funds an online, interactive dental anatomy course. Future projects include 3-D imaging of all the joints of the human body and an expanding skull atlas to demonstrate variations and aberrations.

The wow factor in 3-D imaging is remarkable, but more important effects include a faster, deeper grasp of anatomy in a non-linear learning environment that can benefit not only students but professors and practitioners as well. “We live in a 3-D—and stereo—environment,” Fogel says. “Seeing anatomy in three dimensions can significantly improve learning.” 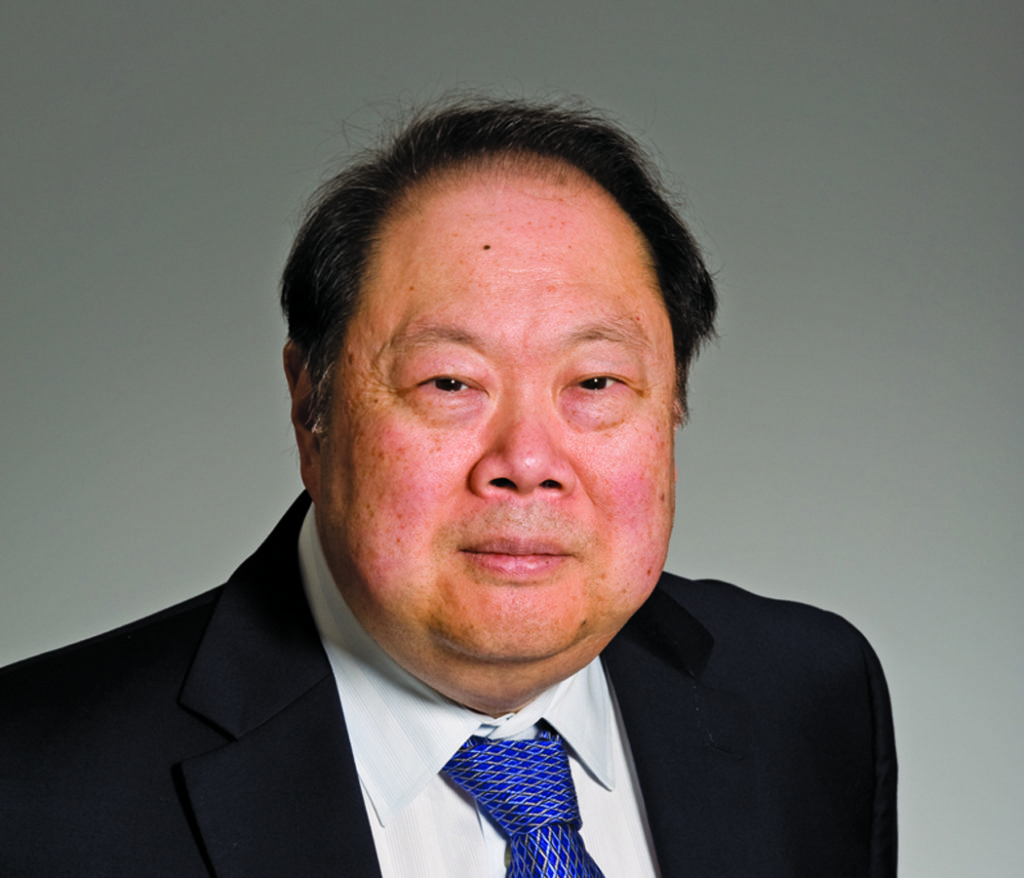 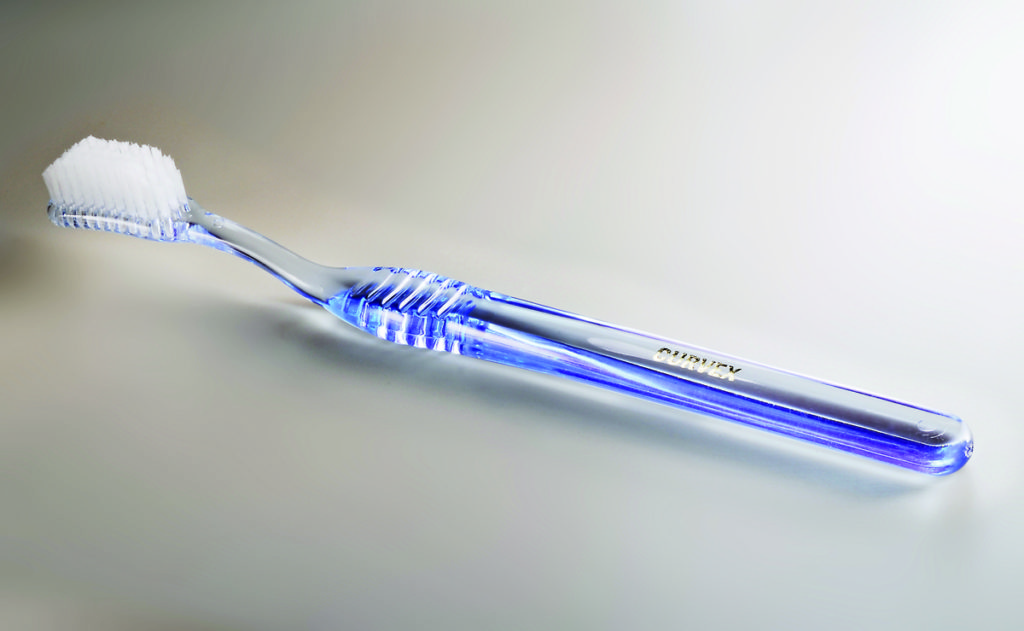 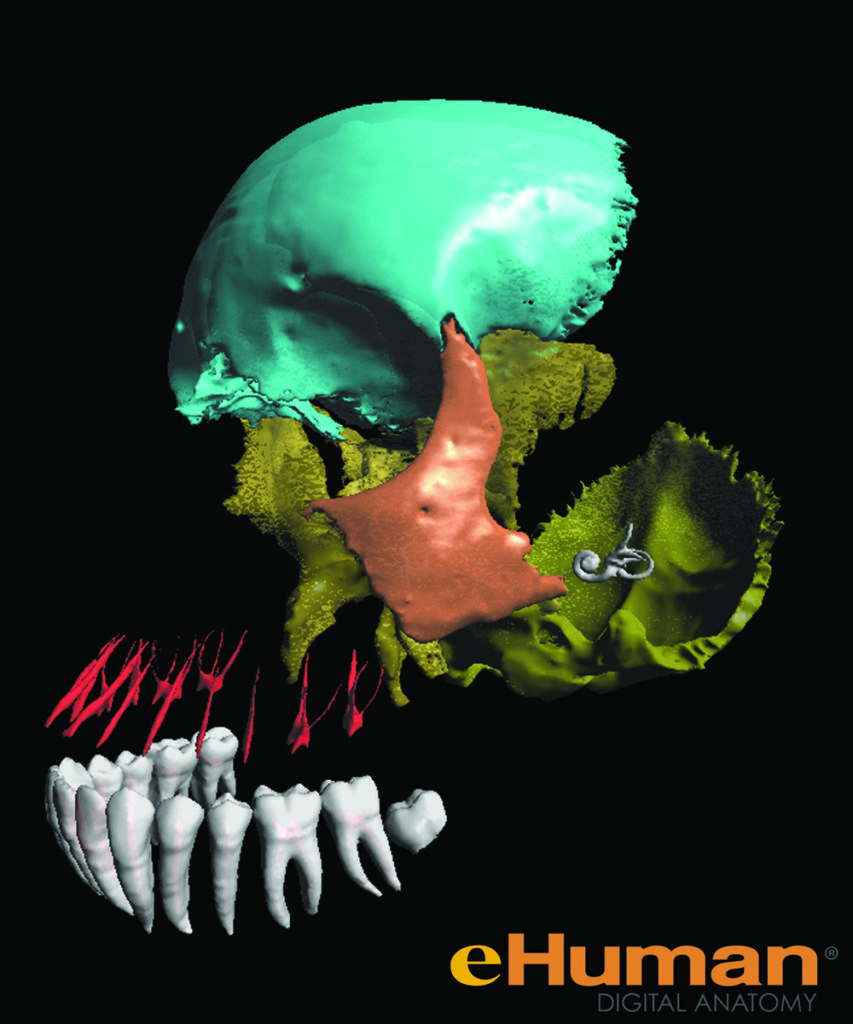 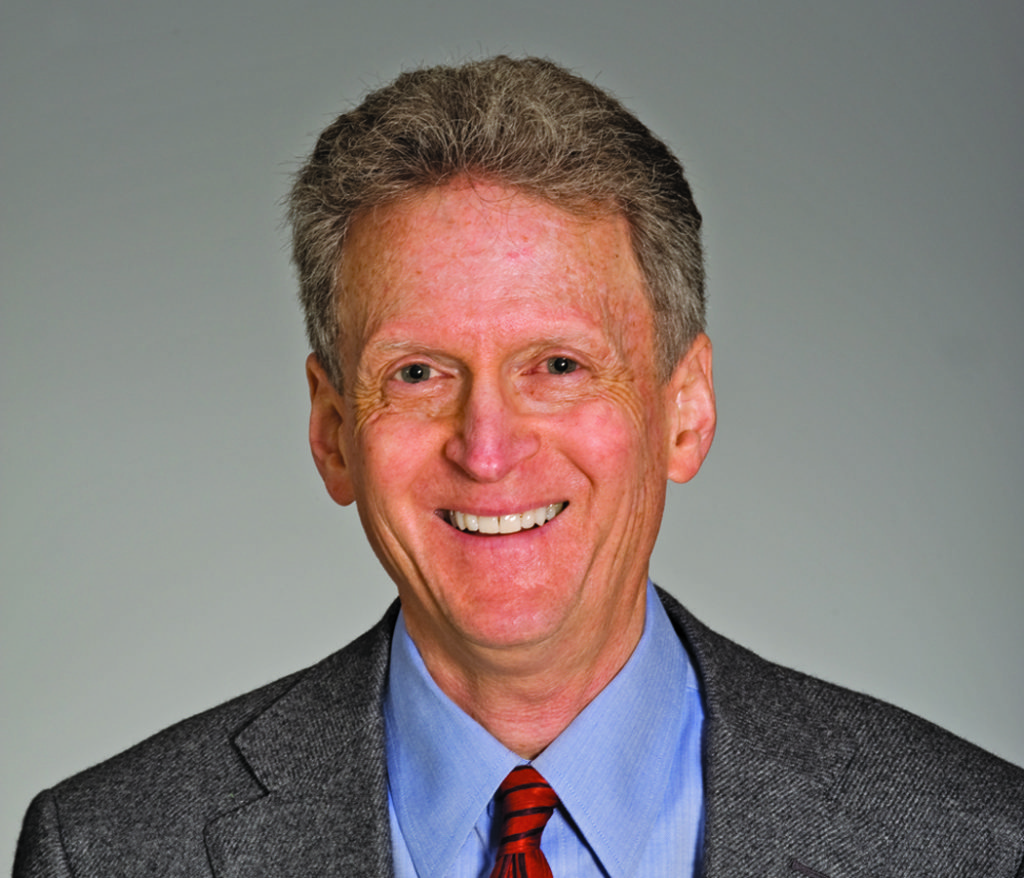 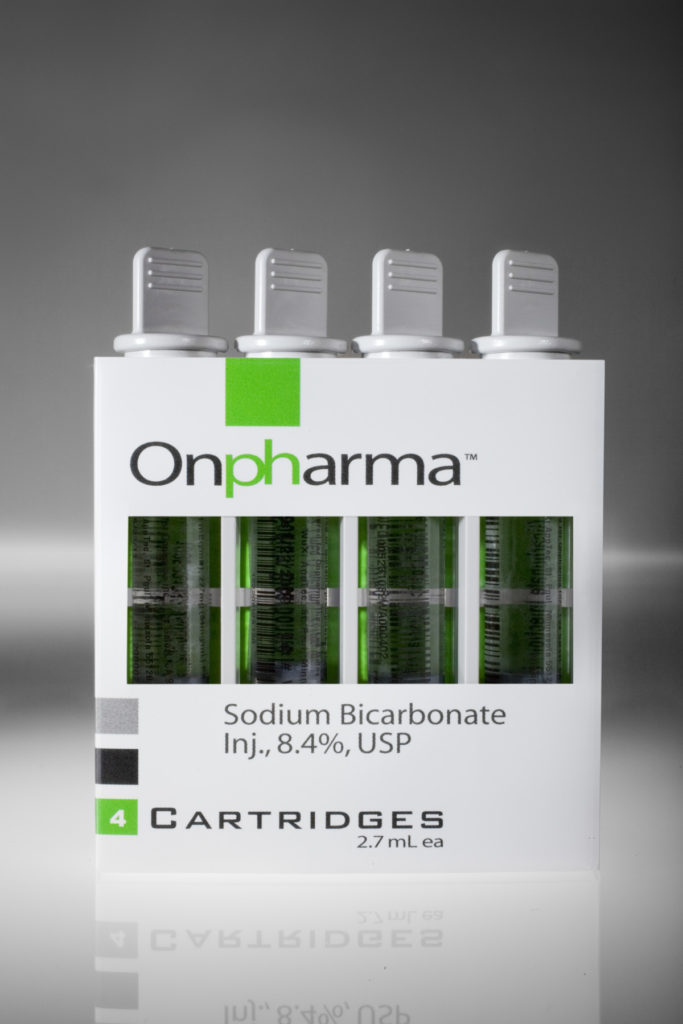 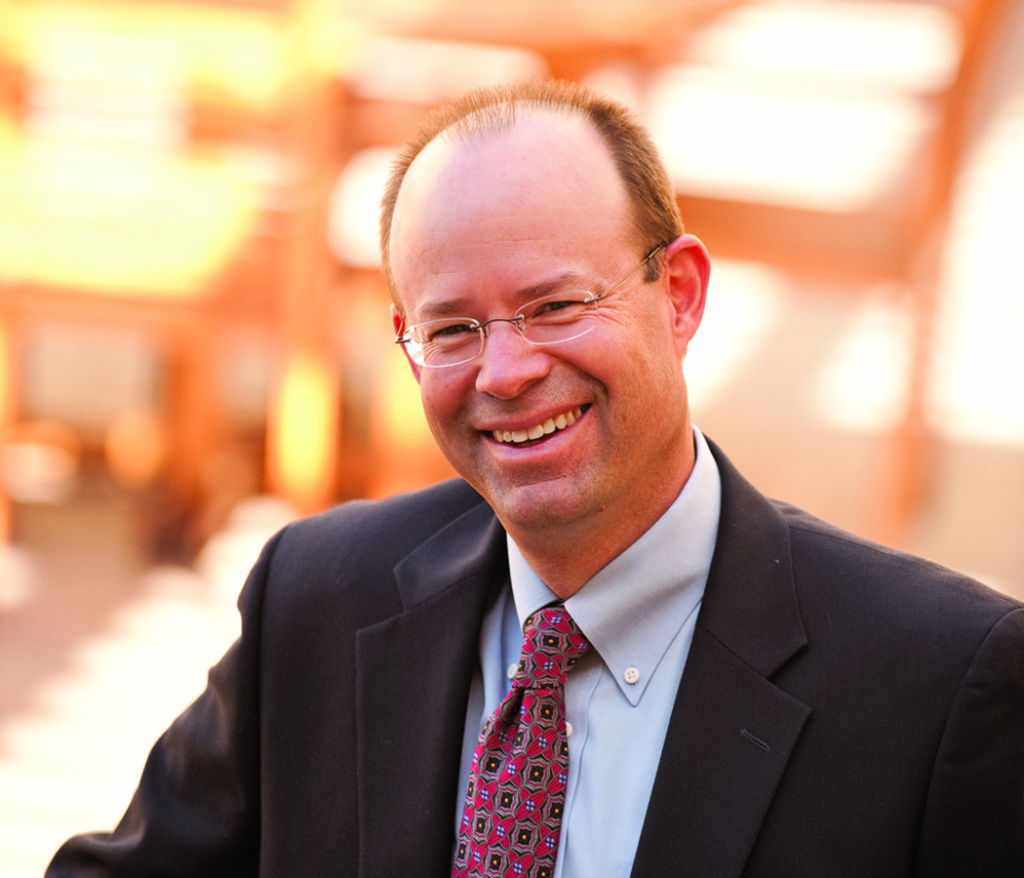