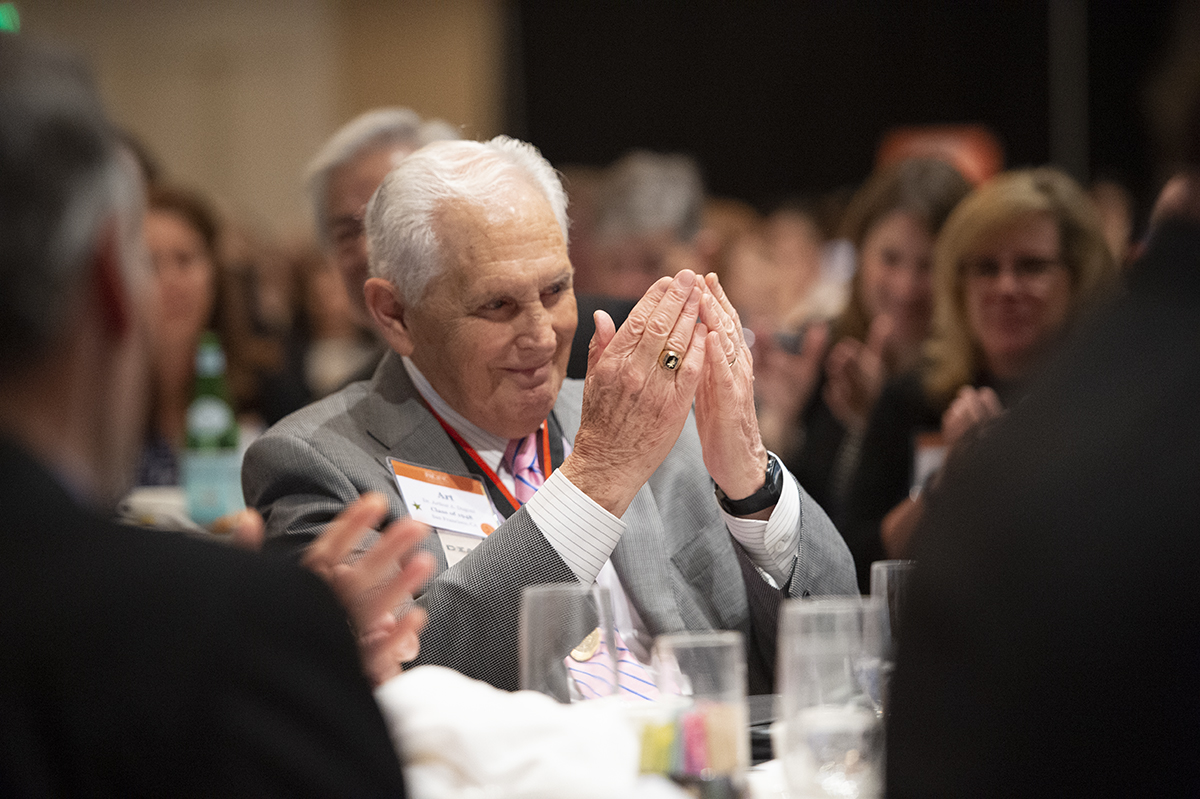 It’s easy to imagine what Carlyle, had he examined dentistry over the past 50 or so years, would have made of Dr. Arthur A. Dugoni ’48, because even several years into Dugoni’s deanship people were already referring to “the Dugoni era.” “When the Mt. Rushmore of dental education is carved,” says former American Dental Education Association President and CEO Richard Valachovic, “the faces that we will see will include Pierre Fauchard, G.V. Black, William J. Gies and, of course, Arthur A. Dugoni.”

Dugoni’s influence on dental education, organized dentistry, provision of care and philanthropy will echo for generations. In particular, people will continue to discern his influence in three main areas: the culture of the dental school, the university and the dental profession; particular educational and philanthropic rhythms at the school, including an expansion in programs and the cultivation of endowments; and a persistent flood of creativity and inspiration. 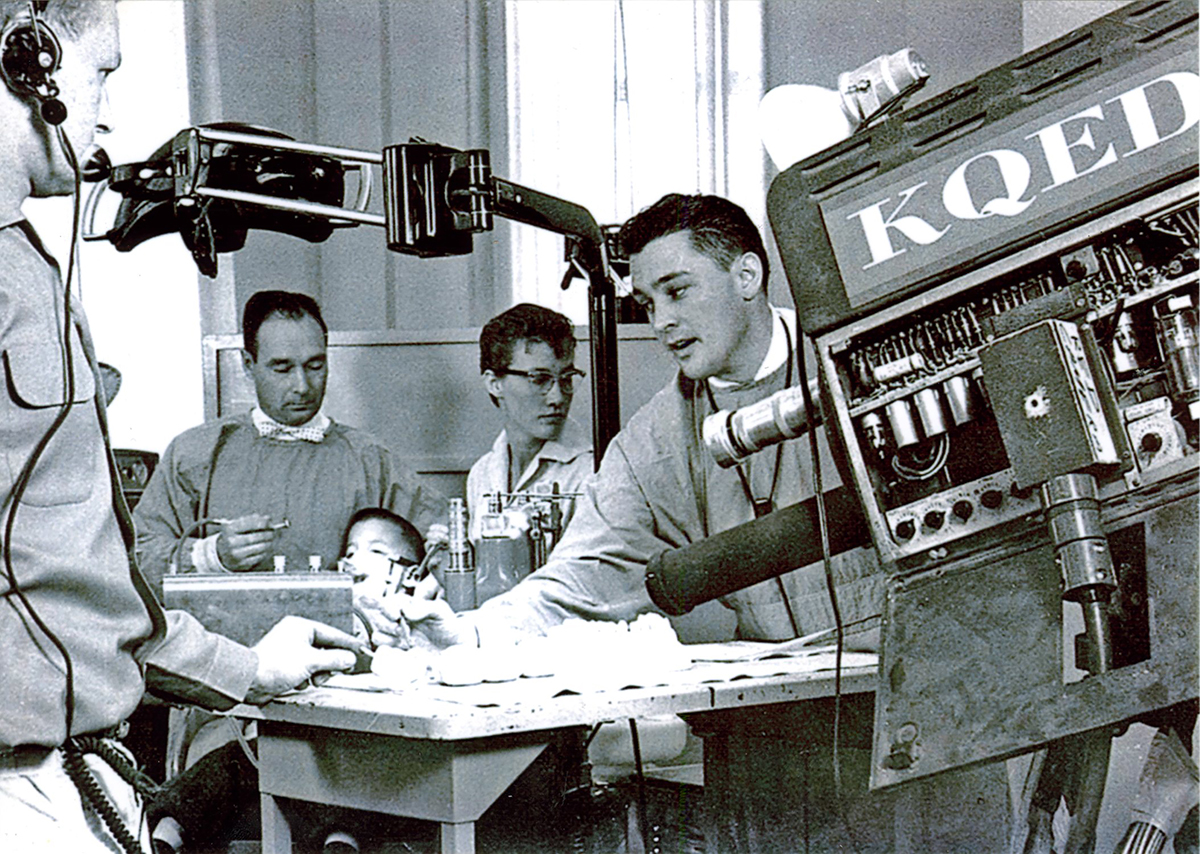 “Art could have been anything he wanted to be: the CEO of a major corporation, coach of a major league team, even president of the United States,” says Dr. David Nielsen ’67, former associate dean and Alumni Association executive director. “How extremely fortunate for us, he chose dentistry and dental education.”

Fortunate, indeed. Dugoni’s talents spanned a unique set of attributes, which, taken together, seemed to exceed the sum of their parts. But the parts were admittedly impressive. Heroic educational exploits? He was an early exponent of the high-speed handpiece, among other strokes of forward thinking, and Pacific’s five-sided, digital preclinical workstation design was copied by dental schools all over America. High-profile dental society adventures? As ADA president, and then past president, his image rippled across dental association exhibit halls for decades. Powerful public speaking? Students, alumni and colleagues alike were starstruck by the dean who presented like a celebrity. Even my kids wanted his autograph. Ironically, the tinier his gestures, the more formidable, and intriguing, his image grew. Dugoni’s reputation for excellence, for instance, included images of him prowling the halls of the school, French cuffs impeccably pressed and calfskin brogues gleaming, bending over to pick up bits of litter. Dugoni became, for many of his students, and probably a majority of instructors, larger than life.

“As a student,” says Dr. Bradford Smith ’86, dean of Midwestern University College of Dental Medicine-Arizona, “I could not imagine that he put his pants on one leg at a time, but only that they must magically hop onto his legs as he went off to save the world.”

Dugoni carefully funneled the influence and goodwill he generated into reinforcing his values—the kind that foster humanism, and the kind that honor family, in its intimacies, its constraints and its promise of encouragement and assistance. “Art was a person who lived close to his heart and loved deeply,” says Peter DuBois, executive director of the California Dental Association. For someone like that, of course dental school folks would become like kin.

“Dr. Arthur Dugoni’s family was far bigger than his immediate relatives, and included all those who were inspired by his life,” writes Dr. Arif Alvi ’84 Ortho, president of the Islamic Republic of Pakistan. “He was a leader whom I have followed, sometimes knowingly, but mostly in being inspired by his actions, admiring them and then subconsciously improving as a person.”

Dugoni’s embrace of a family ethic, as well as his welcoming, avuncular manner and intense interest in other people, led many who knew him to respond with affection. “Many times Art would Dugoni came to concentrate on building endowments, which are essentially principal bank accounts from which the school can harvest interest in perpetuity for student scholarships, faculty development and other critical needs. He long ago established the Arthur A. Dugoni Orthodontic Endowed Scholarship to help offset tuition for residents, and in 1998 he created the Dr. Arthur and Kaye Dugoni Student Scholarship and the Arthur A. Dugoni Endowed Professorship in Orthodontics. In 2015, Dugoni funded the Katherine ‘Kaye’ Dugoni Memorial Endowed Scholarship. In his last months of life, Drs. Brian Dugoni ’08, ’10 Ortho, his grandson, and Saam Zarrabi ’08 told Dugoni of their plans to launch the Art Dugoni Scholar Endowment with the goal of raising $1.5 million to cover the annual tuition for one DDS student.

Dugoni’s great personal gift to the people he came across was to act as a mirror. He helped us see ourselves, not only for what we are, but also for what we could be, and what we should be. His actions, his belief system and the questions he posed, to himself and everyone else, made us stop and think. “Dr. Dugoni taught all of us what it meant to lead, and to give back, and to inspire,” says Dr. Kathleen O’Loughlin, executive director of the American Dental Association. “He encouraged me and so many others to do our best and be our best.”

For Dugoni’s part, after a lifetime of service, he was satisfied. Dean Nadershahi says, “He felt good about his life in what he left behind in all of us.”

Perhaps his most important legacy lies in the attitudes of the people he touched, people who remember his love, take confidence from his favor, gather inspiration from his example and recharge emotional batteries from his favorite sayings. “I think of him often,” says Dr. Craig Yarborough ’80, associate dean for institutional advancement, “and I think of one of Churchill’s great quotes, which he really appreciated, which was, ‘we make a living by what we get, but we make a life by what we give.’”

Alumni Association Director Joanne Fox, asked to sum up Art Dugoni in one word, replies, “Because of his faith in me, and in thousands of other people, and because of his deep religious belief, the word is ‘believe’ and it can be added to ‘Dugoni’s list of Bs.’”

Dr. Eddie Hayashida, former associate dean for administration, says, “Dr. Dugoni was a true inspiration to me, as he inspired me to reach my potential, to model humanistic education, to treat others with dignity and respect, to learn to listen, to live a life worth living, to enjoy the ride and to make a life by giving to others.”

“Many years ago the executive director of the ADA was let go,” Dr.David Chambers, former associate dean for academic affairs, recalls. 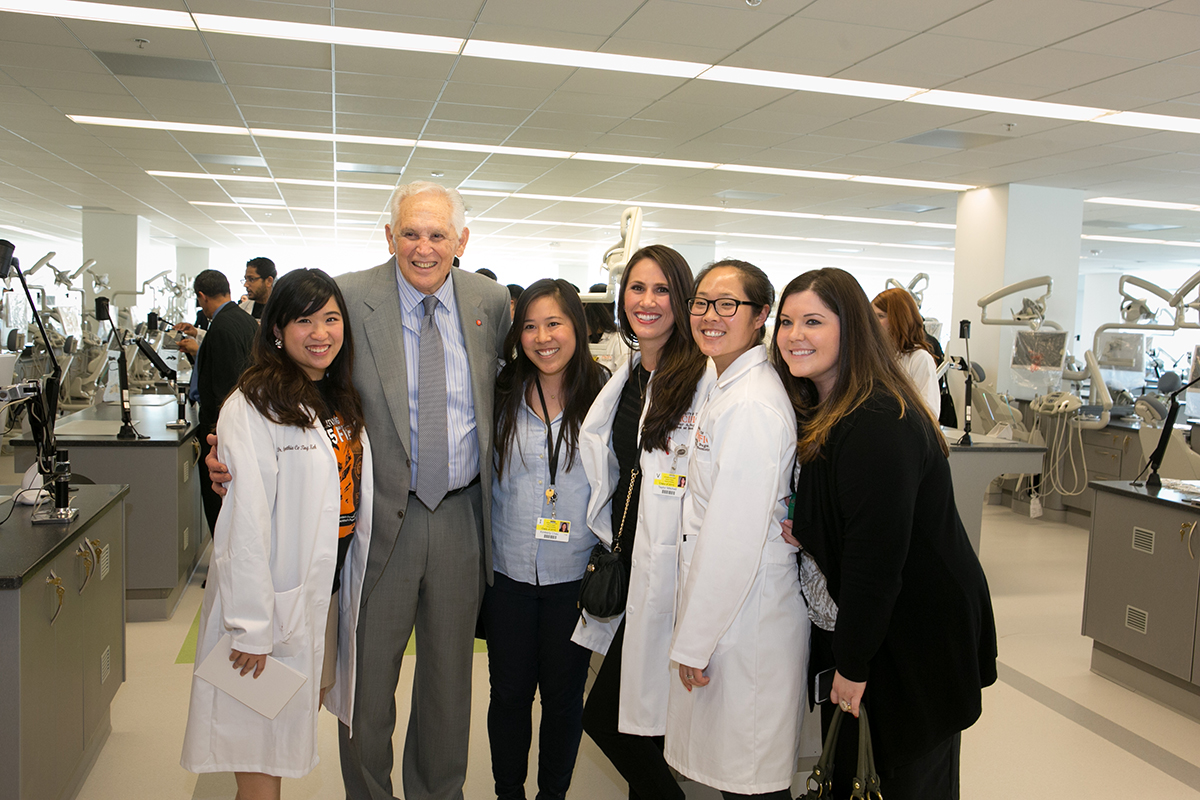 “Several dentists introduced a motion of personal censure into the ADA House of Delegates. Art spoke against it, and it was dropped. Overheard in the halls afterward was some grumbling that, ‘We have just had a lesson in politics from the master.’ Someone joining the conversation said, ‘No, we have just had a lesson in humanism. He showed us how we could be better people.’”

“I know what Art would want us to do now,” says Dr. Robert Christoffersen ’67, former executive associate dean. “He would want his legacy to be moved forward by us. Yes, we all now carry an enormous challenge, but if we carry his legacy forward, our dental education will always remain at a high level of excellence, and we may even change our society. Each of us will never possess all of his traits, but we must try to master as many as possible.”

The dental school is named after Art Dugoni, U.S. Congresswoman Jackie Speier notes, “for obvious reasons. He was dean for almost 30 years and raised a truckload of money to build the new school. But more importantly, the school is named after him so that every student who crosses that threshold will be imbued with his values and ethics.”

“Art died on the 23rd of September,” Chambers muses. “But it’s been a bit eerie. I saw his spirit at the dental school two weeks ago, when I was seeking some help with my computer and a troublesome tooth. Everyone I encountered was smiling. Everyone was helpful. Everyone made me feel that they were glad to see me. It doesn’t matter whether you have actually met Art. You’ve been changed by him. He is no longer with us, but Art Dugoni will always be with us.”

In the great sweep of the history of dentistry, Dr. Arthur A. Dugoni was the right person at the right time, a time that he came to dominate. We inhabit the Dugoni era even now. Note to Thomas Carlyle: Art Dugoni was indeed a great leader. And great leaders have great followers.